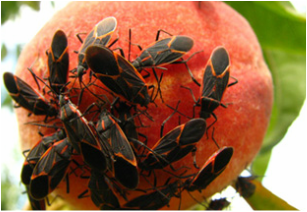 Describe a current example of insect infestation in agricultural territory in detail: A current example of Insect infestation is can be found in Western Canada, especially in Saskatchewan. They have many  instances of infestation in their agriculture.  For example, the cereal sector is one of there most important sectors in that region, yet they have over 20 species of pests attacking their crops.  Many different types of insects causes problems for them, such as Grass Hoppers, wire worms, cut worms, and many more. There are also 8 different species of flea beetles that usually attack Mustard, Canola, and rap seed crops.

What are they doing to help this:  Many farmers use pesticides to protect their crops from insect infestations.  These pesticides help repel the insects from the crops, and allow the farmers to be able to sell them.   Without pesticides, the agri-food industry would be severely effected, and the economy and food supply would feel the impact as well.

Video at link
https://www.realagriculture.com/2014/05/wheat-school-importance-treating-seed/      copy and place on top tab